A booming bassline lures me into a pitch-black chamber on the 10th floor of the Edvard Munch Museum in Oslo. Inside, the Norwegian artist’s images, illuminated by spotlights, appear almost floating in the dark, sinister, while the soundtrack envelops the room: mournful guitar and woodwind motifs, pulsing analogue synths.

The music reflects the tenderness and menace of the artworks, including “Vampire” (1895), “Anxiety” (1894) and “Desire” (1898). A black velvet bench runs along the back wall, and when I sit in front of the paintings, it feels almost ritualistic. That is Satyricon & Munch: an encounter between Munch’s artworks and the Norwegian band Satyricon, specialized in black metal, an extreme form of heavy metal.

The collaboration may seem unconventional, but it creates a far-reaching connection between visual arts and music that connects wide audiences. Multi-generational visitors are drawn to it Satyricon & Munch: families with children, fans in black metal t-shirts, seniors. Some arrive confused from the collaboration; many appear moved.

“I didn’t aspire to do things in the sense of an ‘art institution,'” says Satyricon’s singer and instrumentalist Sigurd Wongraven (aka Satyr) as we meet in the Munch Museum’s sun-drenched café. “I tried to spend some time with beauty, melancholy, fear, death and illness. . . and then let it be music. It’s about giving people a key to the journey within.”

Wongraven, 46, has been a core member of Satyricon for three decades alongside drummer Kjetil-Vidar Haraldstad, aka Frost, touring internationally and often performing in dramatic ‘corpse paint’. They have released 10 albums ranging from explosive riffs to symphonic works; her latest shares her name with the exhibition. Wongraven recalls first seeing Munch’s “Scream” when he was a child visiting the National Museum in Oslo; Years later, his band used Munch’s 1899 lithograph “The Kiss of Death” as the haunting cover art for their 2017 album. Deep Calleth Upon Deep.

Before the pandemic, Wongraven contacted the Munch Museum to delve deeper into music and art. He developed Satyricon & Munch with curator Trine Otte Bak Nielsen; It has 13 works of art, including “The Kiss of Death” and “Self-Portrait under the Mask of a Woman” (1893). The latter could also make a brilliant record cover: an imperious young Munch against a hellish red backdrop.

All art, like music, must be created with one’s own elixir of life

“Music is a waveform, so we talked about the importance of having movement in the artwork, whether it’s flowing hair, bent legs, or branches on a tree,” says Wongraven. “This visual rhythm resonates with the music; so they reinforce each other.”

Munch wrote more than a century ago: “All art, like music, must be created with its own lifeblood.” The artist’s intensity, coupled with a determined do-it-yourself attitude (including his tendency to “remix” versions of his tracks ‘), struck a lasting chord. “Edvard Munch just rented a gallery, made flyers and set up his own exhibitions,” says Wongraven. “Obviously he died in 1944, but that’s also the kind of underground mentality and determination I grew up with musically. Munch must be the original Norwegian black metaller,” he says, smiling. “The true nature of black metal is when it’s unlimited.”

Satyricon took an expansive approach to their hour-long instrumental score for Munch, incorporating various folk, rock and electronic elements. (“We never used 99 percent of what we made. But the 1 percent we used made it better.”) The space itself, designed by Oslo-based architects Manthey Kula, should also feel casual.

“We wanted to maintain the monumentality of the space with these eight-meter-high walls, while maintaining that intimate relationship as you move along the images,” says curator Nielsen. “Munch’s work has this kind of ambiguity that also makes it open to the experimental quality of Satyricon’s music.”

Nielsen admits the historic showdown between art and black metal has unnerved some. “‘The Vampire’ is in a very fragile state. We mounted the speakers vertically on the wall and the subwoofers on the floor to keep the image from vibrating as the paint is actually very loose. We have very good technicians.”

in the Satyricon & Munch, visual arts and music spark a transformative union; The elements seem to enliven and liberate each other, even transcending their surroundings. This is reminiscent of other multi-genre collaborations, such as Shhh . . ., the V&A’s 2004 “invisible exhibition” where visitors borrowed headphones to hear new soundtracks in different galleries. The addition of music seemed to map this place in unexpected ways, leading to gems like hearing Elizabeth Fraser’s mesmerizing singing as you approached the 16th-century Raphael cartoons.

muscle memory at London’s Elephant West in 2019 presented a vibrant, emotive mix of large canvases and digital graphics by painter Anna Liber Lewis, accompanied by new tracks by electronic musician Kieran Hebden, aka Four Tet, and even a rave at the gallery. Referring to their childhood friendship, Hebden said that “what is evoked here is the joy of how good that time was and the melancholy of a bygone era”.

Back at the Munch museum, Wongraven says he regularly works on fine-tuning Satyricon & Munch. “I pay attention to the ‘edges’, sonic adjustments we had to make because the sound changes as the room fills with people,” he says as we return to the 10th floor. 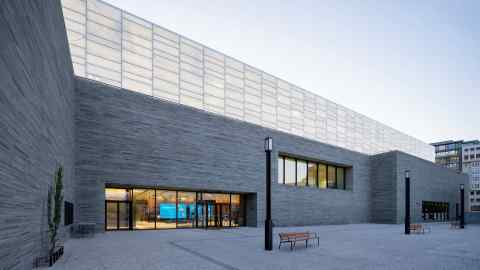 Back in the darkened chamber, we linger in front of Munch’s seldom exhibited painting The Enchanted Forest (1919-25), which shows two figures venturing into an eerie landscape. “I knew I could connect with that and write music inspired by that,” says Wongraven. “When nature is illustrated, it is often full of detail and beauty. But Munch does it naked. One wonders where they are going – and why.”

Munch’s art and Satyricon’s music transport and draw you into these scenes. Time seems to dissolve; endless details emerge from the shadows. For artists and audience, the mix of visual arts and music not only sharpens the senses of visitors, but encourages them to delve deeper into the works.

Satyricon & Munch runs at the Munch Museum, Oslo, until August 28 munchmuseet.no. The album is available to stream now