It hardly feels like it’s been two years since I wrote about Double Masters. Released during the 2020 pandemic summer, the first set featured two rares and two foils per pack for the first time. But perhaps more importantly, it heralded the return of some of Magic’s most iconic and beloved artists from years past. When Double champion 2022 was announced almost a year ago in August 2021, my wheels immediately started spinning. Would we see the same people come back again? Would more artists return to the game? The possibilities were endless.

My 2020 article on the set wasn’t exactly a Grand Art Tour, picking six of my favorite pieces from the 50 new works released during this set. Well, in true Double Masters fashion, this latest release has close to 100 new pieces of art, so we need a little more space to detail some of the standout pieces. This article will take a grand art tour and focus on our theme of the Twos, showing dual roles of outstanding illustrations by regular Magic masters along with some artists we haven’t seen in a while. Put your shoes on folks, we’ve got a lot to do: it’s this Double champion 2022 Great Art Journey!

Our first artist returned to Magic-al a while back in 2018 Dominaria, and has appeared regularly in Magic’s expansions ever since, reinventing and reinterpreting the multiverse as only he could. Donato Giancola is nothing short of a living master and has been one of my favorite artists for as long as I can remember, from the first time I saw his Doomsday Specter to falling in love all over again with his Basic Land Panorama years earlier.

To the Double champion 2022 He created four pieces, but I want to show these two in particular. This pair explores the juxtaposition of the riotous tendencies of the Izzet alongside the serenity of the Selesnya, complementary works of art each excelling in their own way. Thousand Year Storm is based on the half millennium storm of our own Earthly Jupiter, with Privileged Position as its antithesis, a ray of calm and wisdom-filled trees rising toward the sun. Both are really huge 30″ by 24″ oil paintings and I can only hope to see them in person one day. 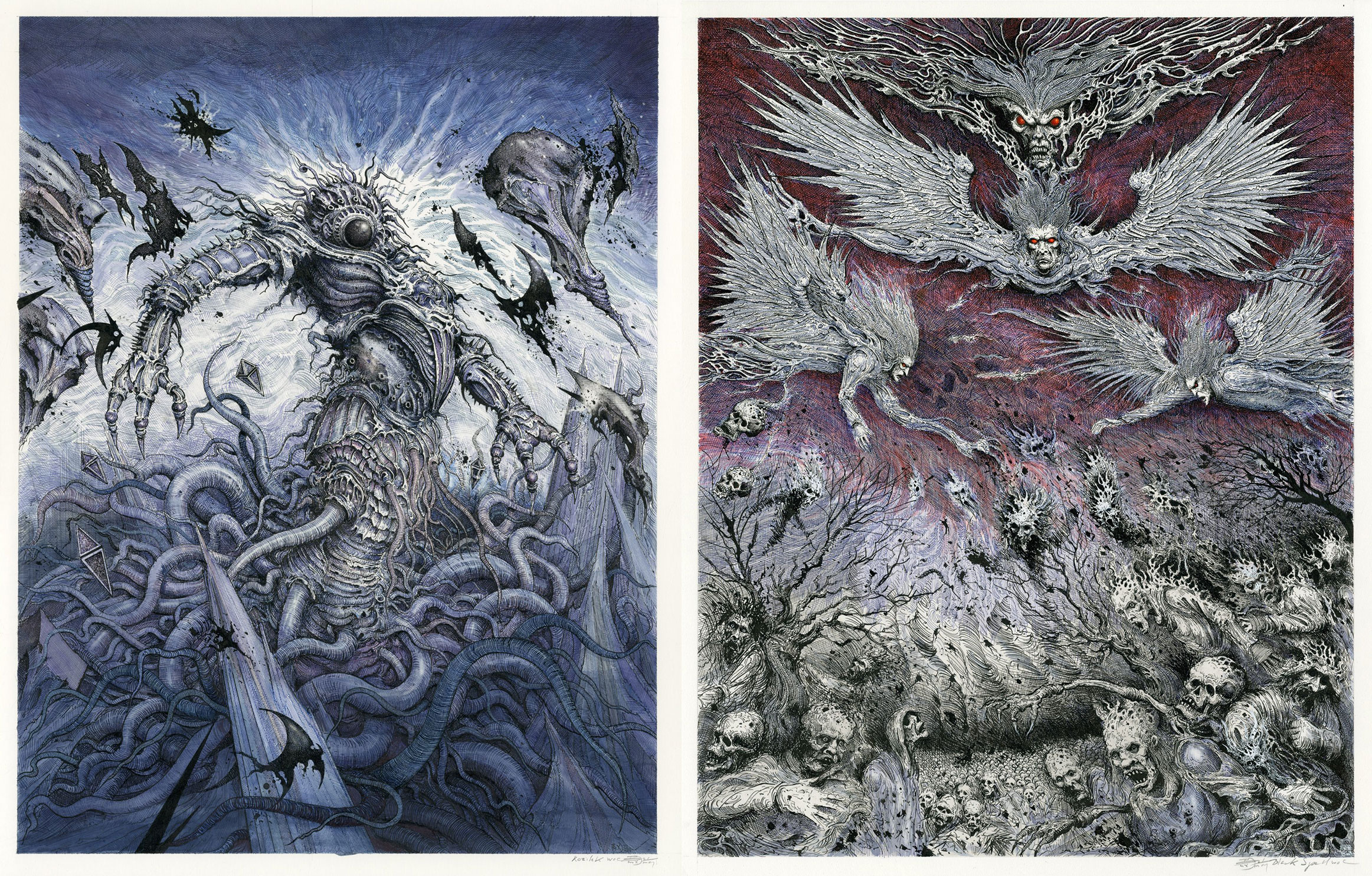 Kozilek, Butcher of Truth and Damnation by Ian Miller

Legendary British illustrator Ian Miller returned to Magic in early 2021 with his signature Varragoth frame, Bloodsky Sire, but it turns out that was just the beginning. He had a total of three parts in this new set, but I want to single out these two, Damnation and Kozilek, Butcher of Truth, for two different reasons. Both are the quintessential Miller. Damnation mixes its signature pen and ink medium with its Hieronymous Bosch-esque composition, while Kozilek comes to us larger than life, but sacrifices none of those thousand (literally) juicy details we can only see magnified. You know an Ian Miller original as soon as you see it, and I’m thrilled to see his work back in a Magic frame. 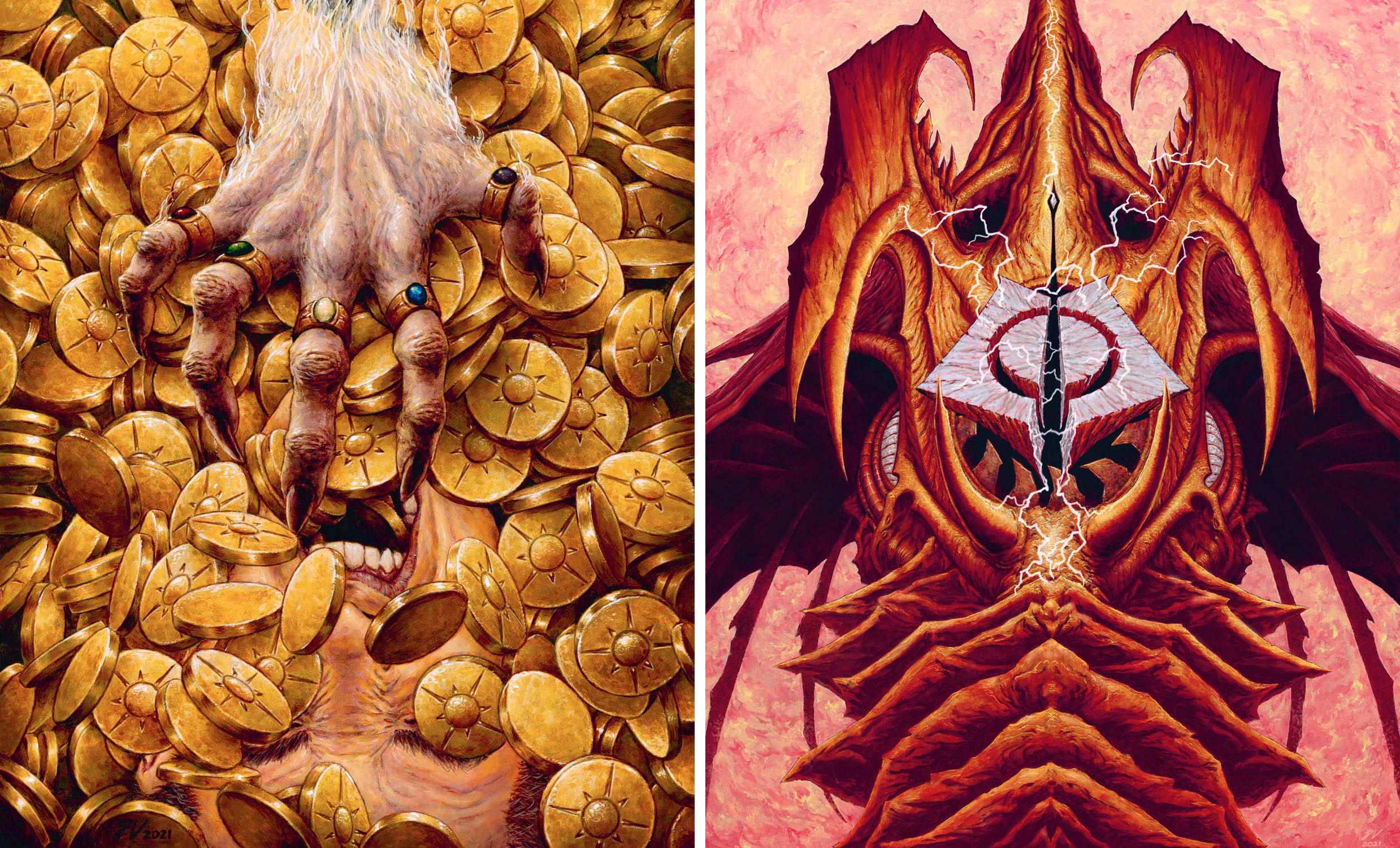 After a brief appearance with Sengir, the Dark Baron for Commander Legends, Pete Venters is back with totally unique and Easter egg filled artwork for this latest set. Outstanding Commander Smothering Tithe is printed in a borderless frame for the first time, displaying all the Orzhov goodness you want to see from the coins to the knobby numerals. But take a closer look, under the frame and behind the text box; it’s the same “tithing” man found in Jason Rainville’s original, now buried under even more confinement and circumstances.

His Phyrexian Altar hides another secret: the Altar we see is on the head of his Phyrexian Dreadnought, which was painted back in 1995-96. It’s a tribute to his early career in Magic and a symbol of how he’s grown and excelled as an artist in the field. Welcome back Pete, it’s good to see you again. 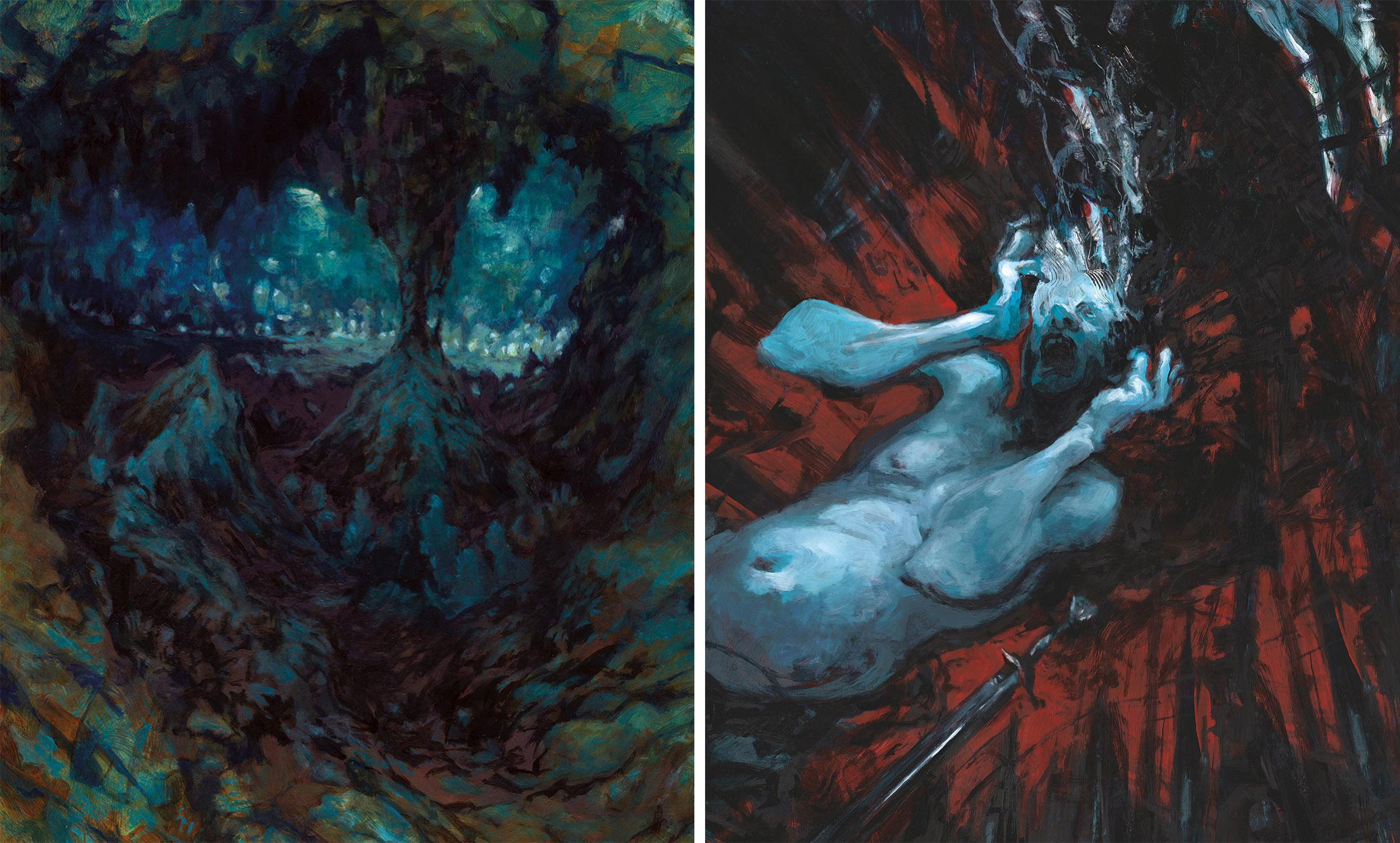 Cavern of Souls & Glimpse the Unthinkable by Drew Tucker

The inimitable Drew Tucker last summer during Modern Horizons 2, and has returned once more in full format with three new works for the game. Glimpse the Unthinkable resembles the more typical Tucker works of old, a bit of abstraction, a dash of horror mixed with an intricate and unusual palette that will have you on the edge of your seat. However, Cavern of Souls is one of only three lands he has ever painted for the magic, and the first since he originally set foot on the plateau way back in Alpha. It’s dark and mysterious, but also enchanting and inviting, a combination he has a particular fondness for in his art. I’d love to see more of his landscapes and really anything from his hand to keep coming to Magic. Tucker was there from the beginning and I really hope he’s there by the end if there ever is one. 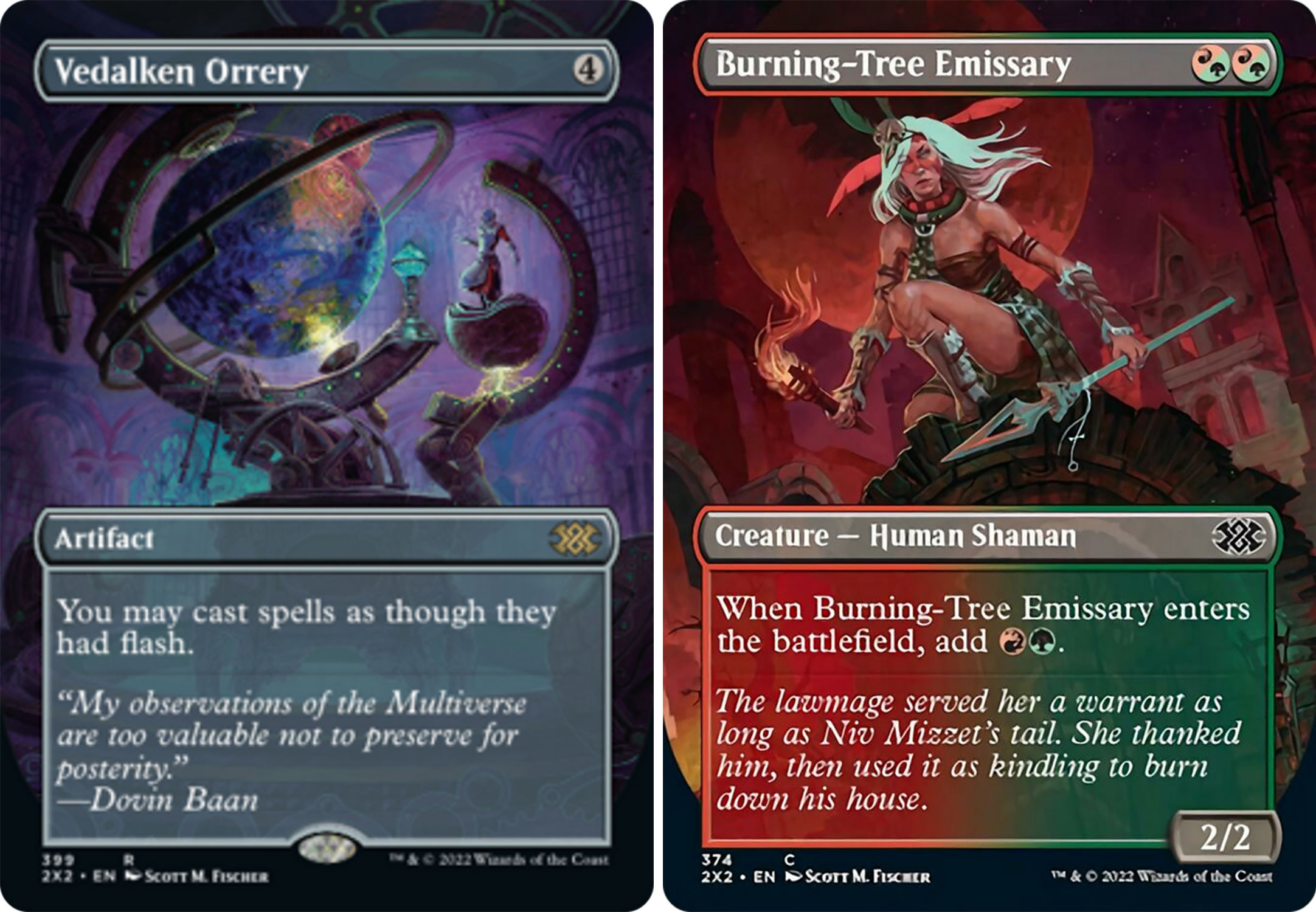 This post is a little different – rather than posting the full resolution, I invite you to watch as these works come to life on Scott’s Instagram. You can find Vedalken Orrery here and Burning Tree Emissaries here.

In fact, it’s been two years since Fischer made a big splash return to the original double champion back in 2020. When I interviewed him back then during that set, he said of Magic, “If fate wills it, I want to be involved in some way, until the day I’m dead and buried.” Ever since that Over time, this wish has been very much granted, and new works appear in sets of Adventures in the forgotten realms by the youngest Streets of New Capenna Collection.

Double champion 2022 Home to four of his artworks, it showcases the full spectrum of his artistic talents, from unique strong female figures to impressive fantastical contraptions. Incredible storytelling lives on in everyone from Dovin Baan’s (one of my favorite characters) study featured in the Orrery to the Gruul wild mage perched high above their finest campfire; a work of art of their work of art. Fischer works big and bright and beautiful with as much dynamism as anyone creating today, and Magic is a better place to have his art back in there.

The last entry for today are not works by the same artist, but two outstanding ones that I didn’t want to refrain from mentioning. Eric Velhagen had illustrated a handful of cards before his boundless return in the first Double Masters, and we’re finally seeing his emotional and moving style fully realized in a Legend that will see tons of play. Its Muldrotha uses a unique palette, the perfect composition for the map as the creature’s power surges and collapses from edge to edge. I’m really looking forward to seeing his work up close at the IX later this year and maybe this painting will even be there.

Master Craftsman and Man of the Mox Dan Frazier spins 180 degrees and has his first card since his Secret Lair, his first in another long stretch of time. It’s not often that I write about a brick wall, but Frazier did something very special by making something so static so very interesting. The borderless border encourages us to explore the entirety of the work, and removing the border reveals even more that we haven’t seen before, including some colors that sadly didn’t make it into the final print. There’s a lot more to Dan’s work than just bits and pieces of magical technology, and maybe more landscape-like arts to be found in his future? Hopefully.

I hope you enjoyed this Double Masters Grand Art Tour. Getting such nostalgic artists to join and rejoin the game becomes something to look forward to every other summer for art-loving players and collectors. I think it’s probably something we’ll continue in one form or another.

If I had only one criticism from this set, it would be the same as the last iteration, a point off BibliovoreOrc on Twitter which I would like to reproduce here. There are many cards in need of new art: I would love to see more of these staples in this format commissioned by women and colorists. Of the new artworks from the 2022 Double Masters, fewer than a dozen fall into this category. While it’s a better percentage than last time, there’s still plenty of room for new possibilities, especially compared to the progress made in other sets. The impact of new artists and the stories they tell is greater than the game itself, and I hope we continue to see growth in Magic’s artistic ranks of people to hear from.

I’m looking forward to the dog days this summer and will be heading to the SOLD OUT CommandFest Orlando in two weeks with Andrew Mar. So if you’re going to be there, please stop by and say hi! I’ll likely be writing about some of the resulting shenanigans, so make sure to tune in again in two weeks. Be safe out there and we’ll be talking again soon.

Donny Caltrider has been playing Magic since 2002 and collecting original Magic art since 2017. He has an MA in Museum Studies from Johns Hopkins University and enjoys telling stories about art, objects and the intersection of fantasy and reality. You find him on Twitter We’re talking about #mtgart, museums and other #vorthos related goodness. Follow us and keep the conversation going!