New Delhi: Animated or aggressive? Debate over the emblem on the new Parliament building is raging, with several historians dismayed that the essence of the original “protective” Ashokan lions has been erased, while others say the differences are minute and no two works of art can be identical.

India’s emblematic lions have come under scrutiny since Prime Minister Narendra Modi unveiled the occupation of the national emblem last week. The discourse it evoked was immediate and polarized.

According to several historians, including Harbans Mukhia, Rajmohan Gandhi, Kunal Chakrabarti, and Nayanjot Lahiri, the “new lions” are “dissimilar” to the Ashoka specimens and do not exude the same calm and peace.

Fellow historian Paromita Das Gupta disagreed, arguing that the lions in the most recent cast appear larger and livelier, consistent with the animal’s character.

“The artists who created them are more than 2,500 years apart, so the craftsmanship will understandably differ. It cannot be a copy as no two artworks are identical,” the assistant professor at Hyderabad’s Mahindra University told PTI.

The differences between the new emblem and the original lion capital of Ashoka at Sarnath are very clear, said Rajmohan Gandhi, a historian who currently teaches at the University of Illinois at Urbana-Champaign.

“Anyone who even takes a quick look at the relevant photos can tell a difference,” Mahatma Gandhi’s grandson told PTI.

“The original work has dignity and confidence. The lions there are protective lions. The current sculpture shows anger and uneasiness. The lions are aggressive here,” he said.

“Lions are meant to be aggressive, but these lions (Ashokan) are not aggressive, they send the message of peace and protection and are a benign breed of lion. The teeth are more visible in the new lions, which is not the case in the older ones,” Mukhia told PTI.

Showing the teeth is a strong sign of “aggressiveness” that shows the “aggressive nationalism” that wants to be portrayed, he said.

This was not done unconsciously or was artistic license, he said. In his view, while artists have freedom, they cannot change the fundamental message that the artwork seeks to convey.

“The teeth are particularly aggressive here. It changes the fundamental nature. Modifications convey meaning. What kind of message is this regime trying to convey? Are you turning India from a peaceful nation into an aggressive one?”

The original lions conveyed the importance of peace and protection, Mukhia emphasized.

Kunal Chakrabarti, who retired as a professor of ancient Indian history at Jawaharlal Nehru University, said the emblem on the new parliament building looks “different” from what has been seen for many years.

“There is no doubt that the Lions of Sarnath exude inner strength and calm,” said Chakrabarti.

He said he needed to take a closer look at the new emblem on the Parliament building to better judge it.

“I saw the Ashokan lions up close and they exude the peace, strength, calm and protection that a new nation should have,” he said.

“I could see that the teeth are more visible (in the lions on Parliament). I also heard the manufacturer say on TV that they are similar, but they are visibly dissimilar, there’s no doubt about that,” Chakrabarti assured.

Ancient India expert Nayanjot Lahiri has also pointed out that the “feral expression” on the new lions’ faces differs “qualitatively” from the “benign aura” of their back-to-back brethren in the capital, Sarnath.

“Admirers of the new parliamentary form can certainly claim that this is a reinterpretation of an earlier symbol. But the restraint in repose so unique to the lion images of the ancient capital of Ashoka has become a victim here,” she said in an article in the Indian Express. She added that the essence of the original has been erased. 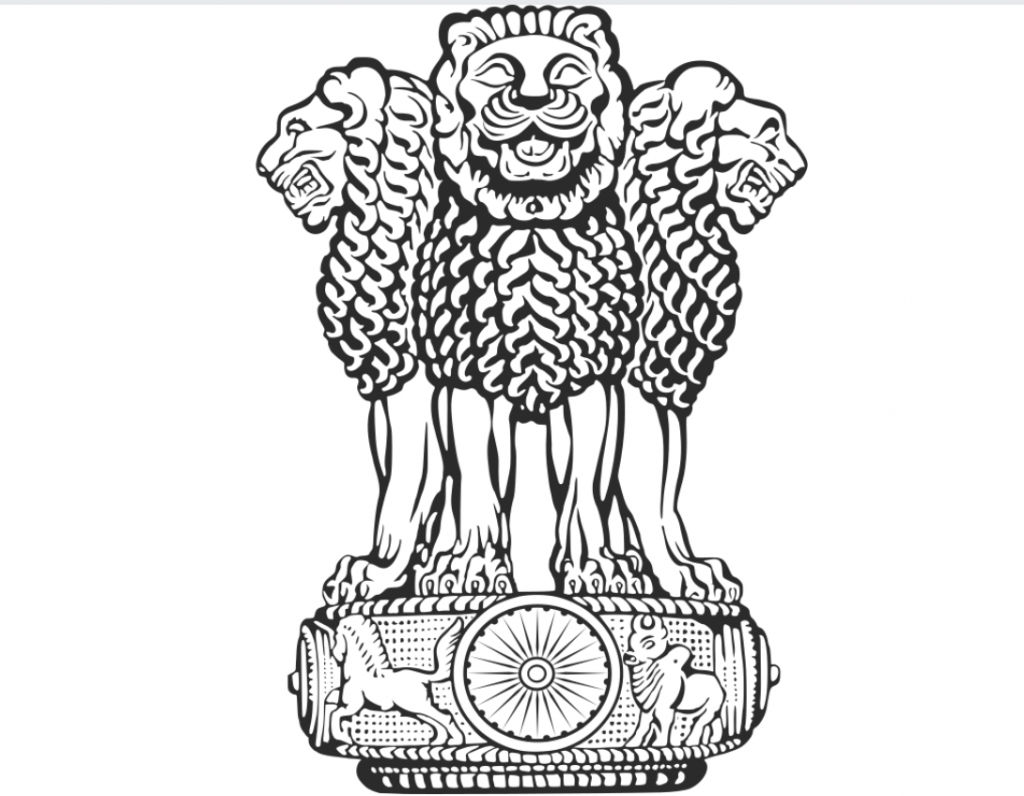 The official logo of the national coat of arms. Photo: GODL-India

Paromita Das Gupta took her point, saying the images of the latest imitation in the new parliament building appear to bear the essential symbols or markings of the national emblem adopted in 1950 when India became a republic.

“The tiny differences lie in the size/dimensions of the new adaptation. The lions in the new cast look bigger and livelier, true to the animal’s character,” she said.

“As long as the basic elements remain unchanged and follow the principles of the State Emblem of India Act 2005, there is technically no significant difference between the adaptation of the Moorish lions and the recent imitation of the national emblem,” she said.

She called the controversy “highly unnecessary” and said the “basic elements/symbols of the national emblem have not been compromised or distorted”.

Therefore, the debate is pointless and the criticism unfounded, she said.

The opposition has accused the government of giving the sculpture a “wild” look and insulting the symbol, while the BJP dismissed it as yet another “conspiracy” to target Modi.

The national emblem is an adaptation of the lion capital of Asoka near Sarnath. The capital was originally installed approx. 250 BC by order of the Moorish Emperor Ashoka on a pillar in Sarnath, the site of Gautama Buddha’s first sermon.