A glorious coastline, beautiful countryside, irresistible romantic ruins and wonderful local produce make Dorset a superb destination. Here’s our guide on what to do, where to stay and what to eat.

Apart from the more striking stretches of coastline and Bournemouth’s polished urban sprawl towards Hampshire, Dorset is England’s disheveled and delightfully understated county. A wildly rural oasis between the crowds of Devon and Cornwall and the commuter area, the county’s rural character of chimney smoke and thatched villages inspired Thomas Hardy’s pen and is deliberately stuck in time.

What to do in Dorset

A Sparkling Wine of the Year award from the IWSC put Langham firmly on the wine map and brought Dorset’s quietly burgeoning wine scene into focus. For an in-depth look at Langham’s Chardonnay, Pinot Noir and Pinot Meunier, opt for the 2-hour tour or take a self-guided tour of the vines, followed by a delicious no-frills lunch with a glass of Langham’s four wines. 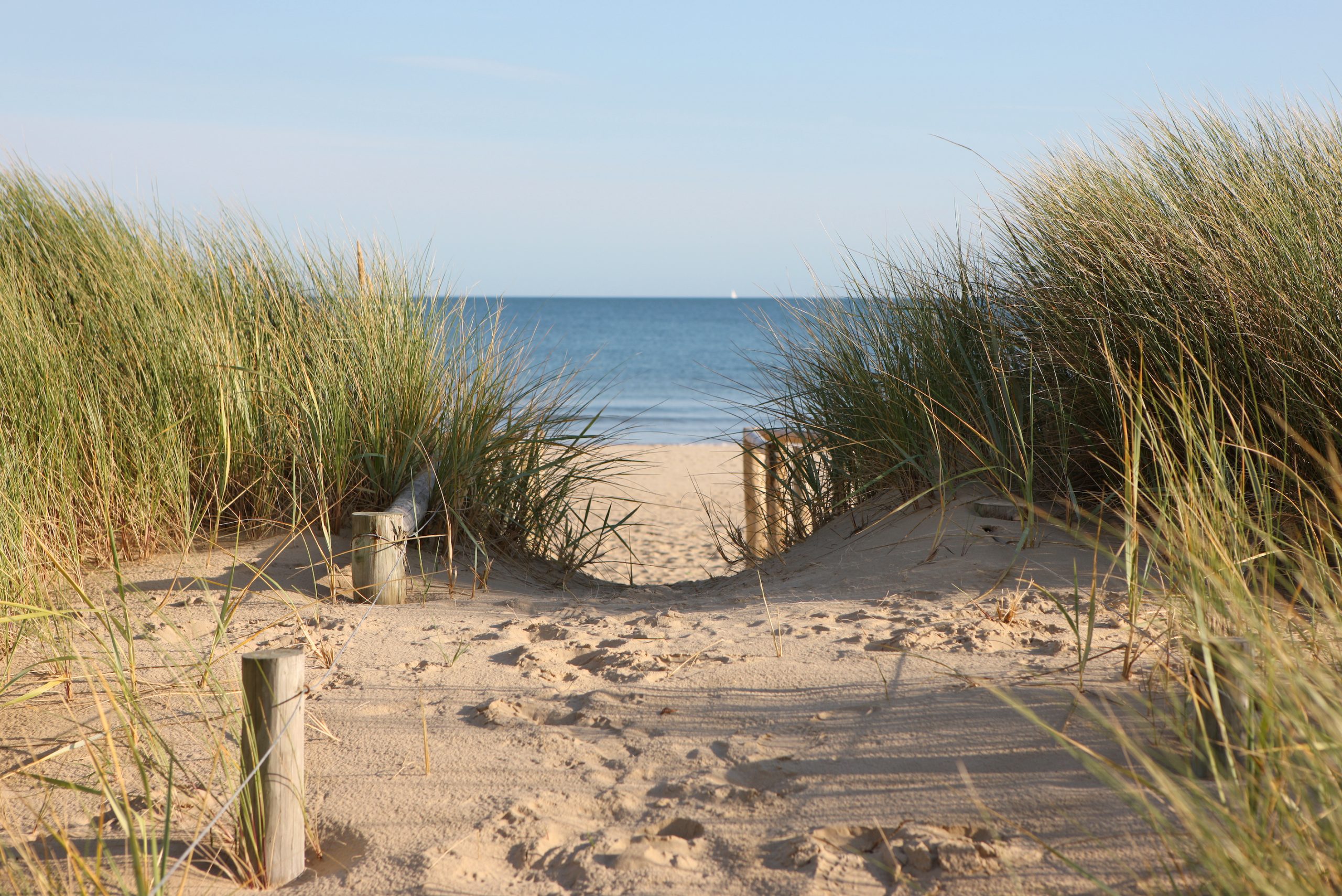 Head to Sandbanks for a beach shack-lined promenade or Shell Bay for pristine buttermilk sands.

Further west, the fossil country feels more rugged and untamed, with Lulworth Cove, a particularly beautiful cove not far from the world-famous Durdle Door (which you see at the top of this page). 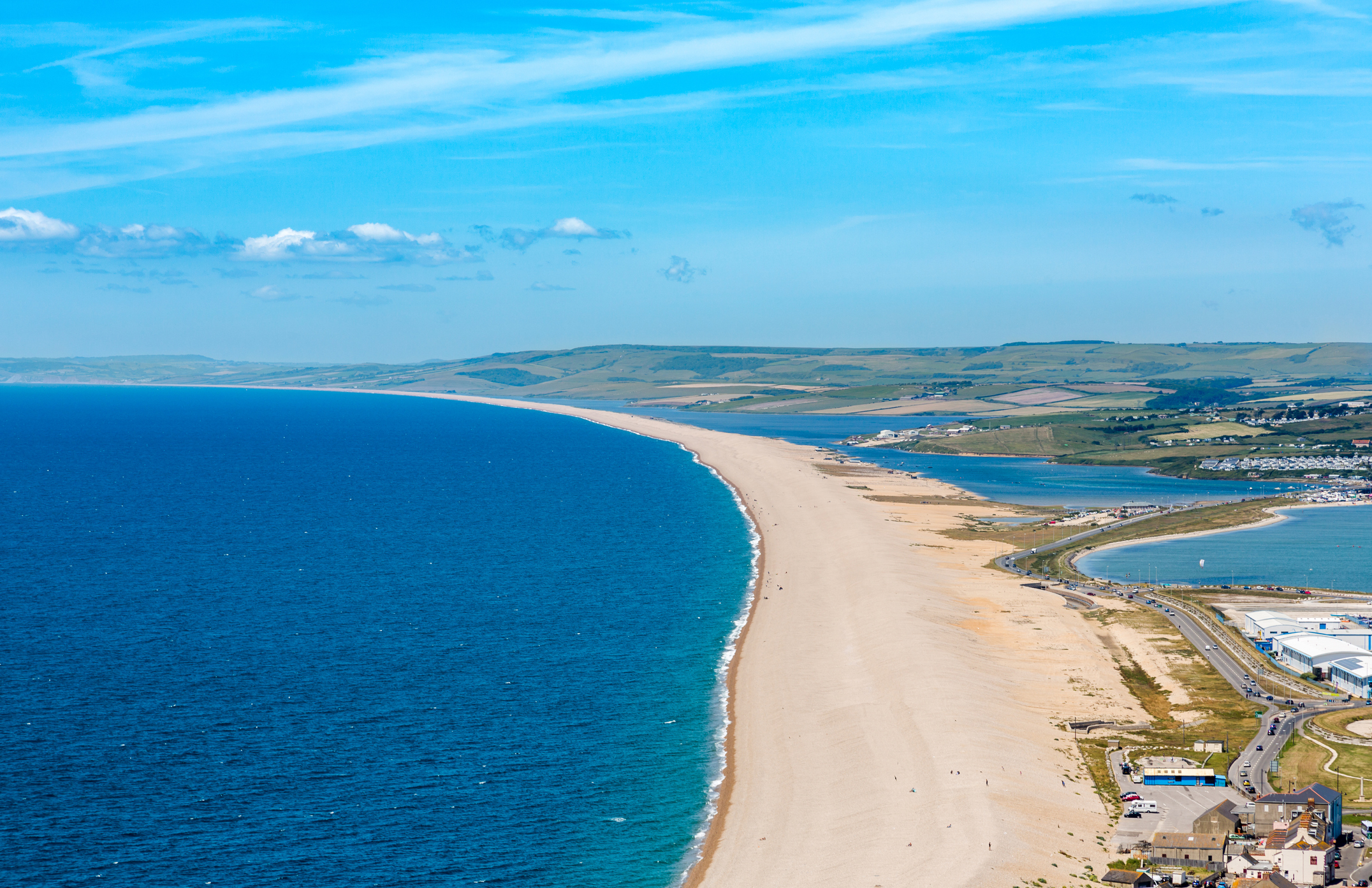 Chesil Beach is the longest in Britain.

This 18-mile stretch of shale flanking a lagoon is famous for the fossils found here that shed so much light on the age of the dinosaurs. It even gave the area the name by which it is often known today: the Jurassic Coast, a UNESCO World Heritage Site.

Whether you reach it by ferry from Poole Quay or hire a small motorboat, Brownsea Island is a day trip worthy of Enid Blyton. Red squirrels, sika deer, oystercatchers and kingfishers are strictly protected as part of this nature reserve and thrive in a mosaic of forest, heath and lagoon. 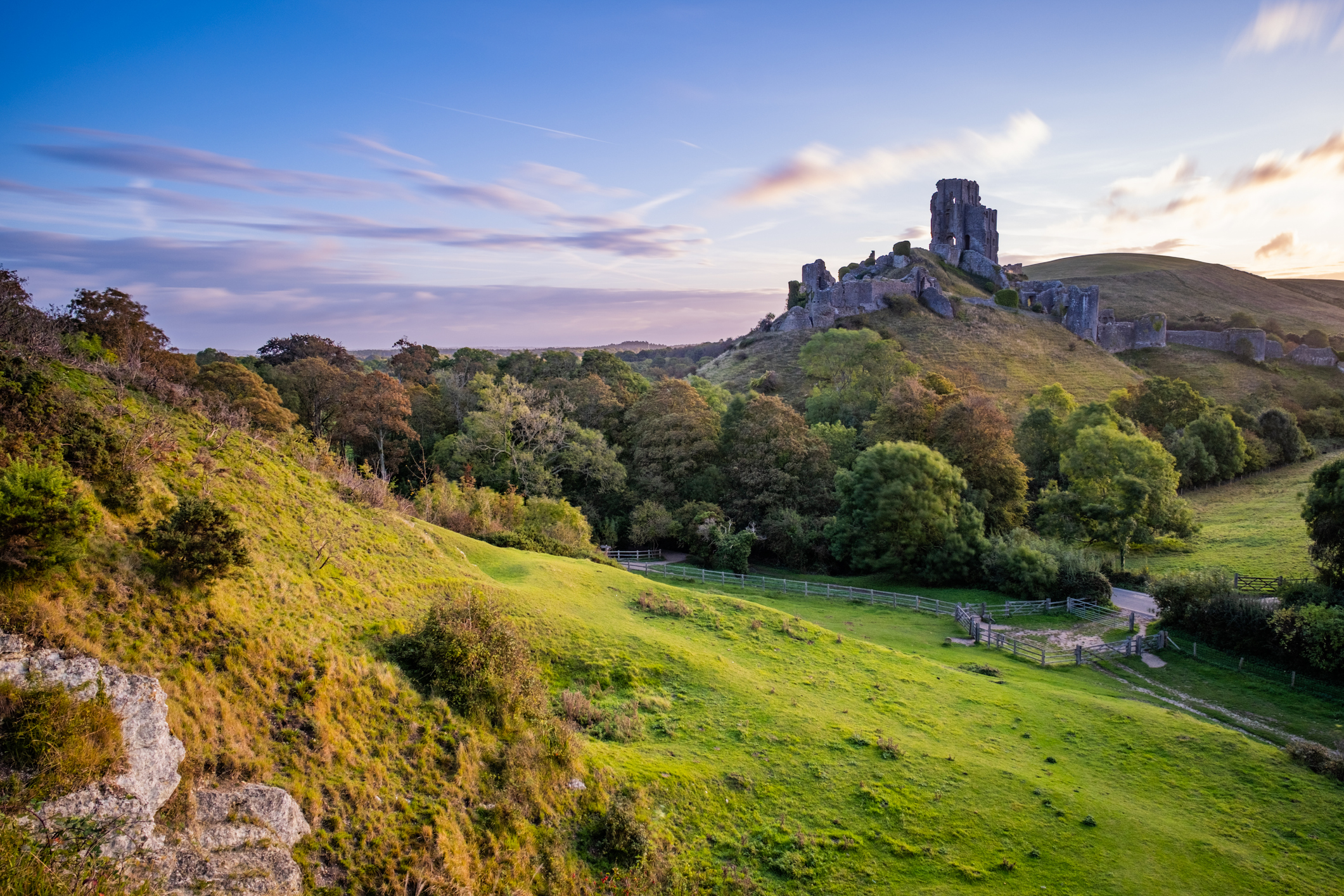 The village of Corfe Castle tumbles down the hillside with weathered thatched cottages and historic pubs, all under the menacing gaze of the castle ruins. Visitors wander in and out of old-fashioned candy stores for candy canes, humbugs and fudge, while saucers clink in tearooms full of scones laden with clotted cream.

With its burgeoning arts and home furnishings scene, artisanal backbone that cities are now fetishizing, and proximity to trendy West Bay and Burton Bradstock, this West Country market town is having a moment. Bridport comes alive on Wednesday and Saturday when the main square comes alive with market stalls whipping up everything from coastal loot to antique furniture.

The best hotels in Dorset

Pension by the sea

The team behind the Groucho Club turned their gaze south-west, towards Burton Bradstock, and settled atop an unloved retirement home that peered out over Lyme Bay. Now, white tablecloths, long lobster lunches, and misty sea views paint a nostalgic picture, while rooms hit that refreshed historic sweet spot with freestanding bathtubs and wood paneling galore.
From £245 per night

This creamy coastal pile is a parent’s nirvana while keeping things civilized for those without them. Interiors are the epitome of fresh, contemporary classicism, recently renovated, while an Elemis-filled spa pampers guests already weary from the salty air of the Jurassic Coast.
From £140 per night

The Pig on the Beach 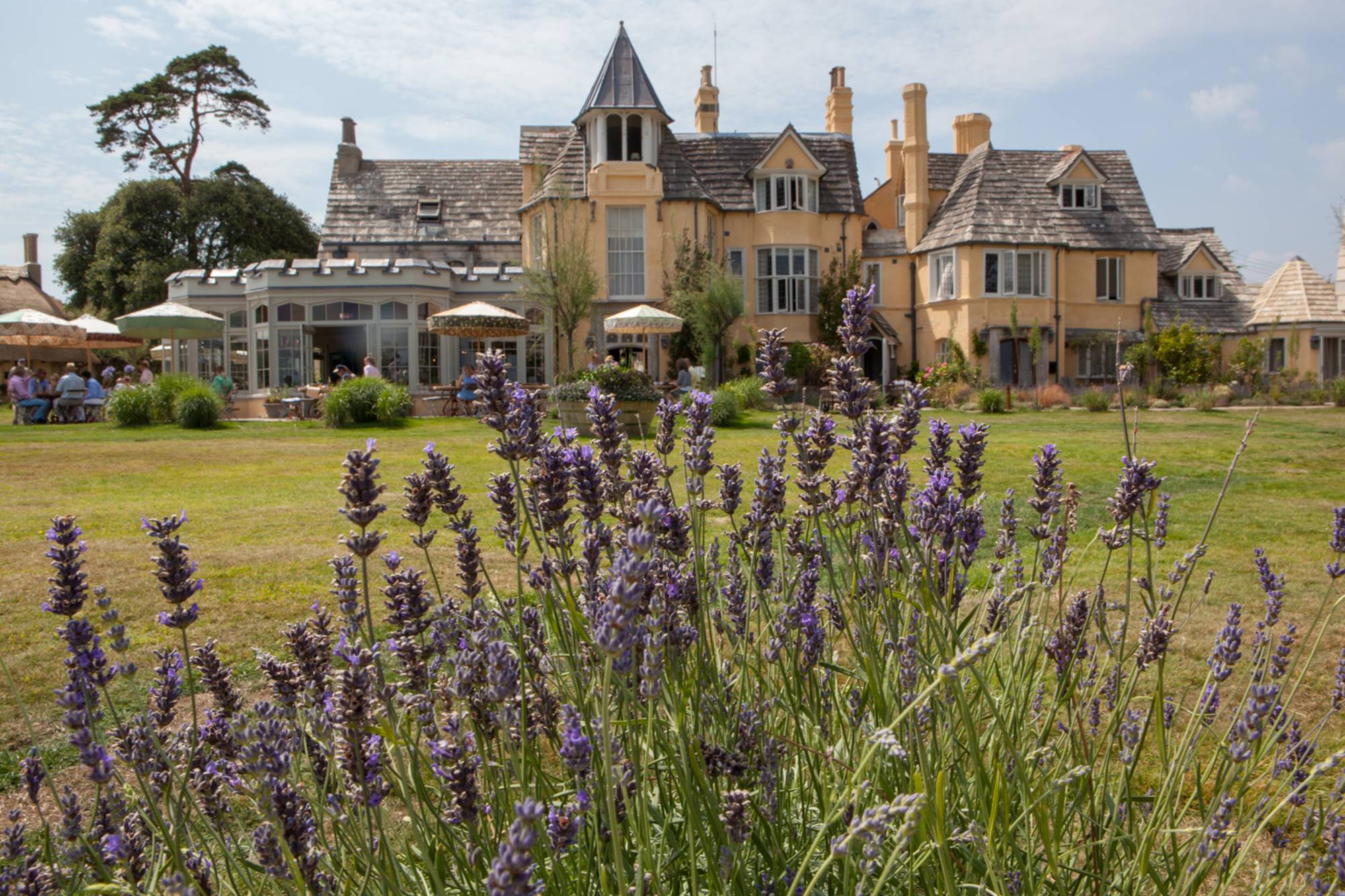 The far-reaching sea views from the cliff top of Pig-on-the-Beach are intoxicating. As is the architecture and interior of this fashionable hotel: a motley pig-towered building that combines Gothic and Victorian elements with a cool twist on the historical drama that unfolds within. Wild local fare sits on the rustic tables in the orangery: expect pollock rolled in this morning and vegetables plucked from the kitchen gardens.
From £342 per night 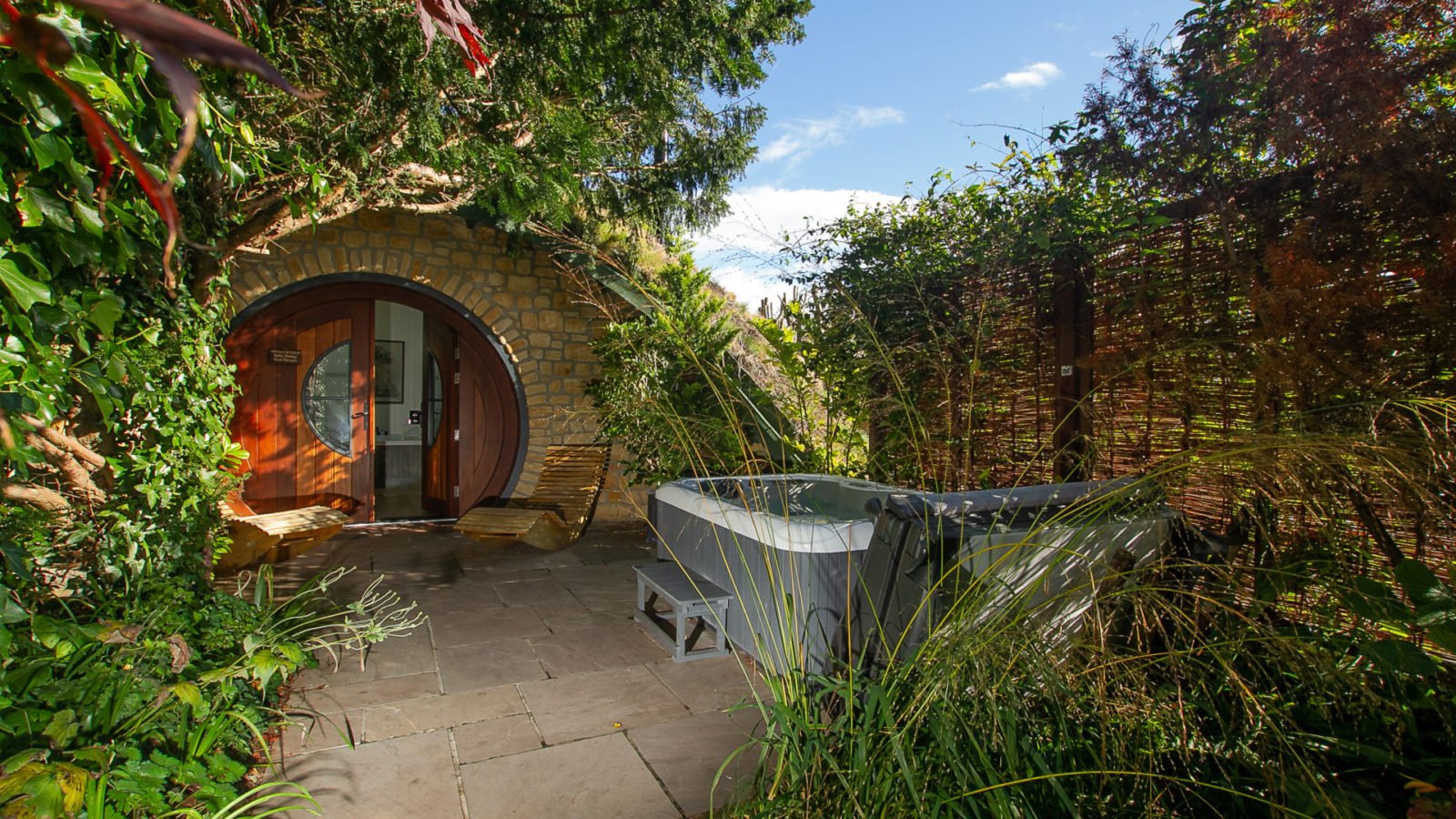 This red-brick Sherborne townhouse is a portal into a sprawling maze of traditional rooms and renovated flowersheds tucked away along a secret walled garden. After a recent reorganization, the Locavore restaurant’s menu splits into more a la carte duck leg bon bons and pork belly with sobrassado-roasted fennel, as well as the upscale classics – fish and chips and sticky toffee pudding.
From £290 per night

The best restaurants in Dorset

On the outskirts of the hip seaside town of Burton Bradstock is Bredy Farm, whose dairy parlor-turned-pizzeria is considered one of the region’s most popular lunch spots. Portofino-style dishes adorned with local mackerel, prosciutto with caper berries, salsiccia and savory pizzas showcase West Dorset farming prowess; The latter comes piping hot from a makeshift wood-burning stove.

Housed in a blue cottage in one of Dorset’s most idyllic market towns, The Wimborne Pig pays homage to the county’s wild farming and fishing traditions. Its beginnings as a delicatessen blossomed into an actual restaurant—two stories of original hardwood floors with a menu of Jurassic Coast steak, brisket and pork belly Low-and-Slow Ballotine, and allotment beetroot hummus.

Well-documented as Britain’s most expensive piece of sand, Sandbanks borders on the Bournemouth side of Dorset’s character, where Rick Stein is the hottest table. Expect Brownsea Island oysters, Stein’s legendary Indonesian seafood curry and Cornish lobster thermidor, all with sparkling views across the bay.

Nestled in a sleepy scene of thatched cottages and nostalgic telephone boxes in West Dorset lies The Acorn Inn, which stars in Thomas Hardy’s Tess from the d’Urbervilles puts it on the literary pilgrim card). Low wooden beams, a quirky bowling alley and two bars buzz with locals enjoying real ales and Dorset gins with hearty plates of Portland lamb chops.

Paula Lester – herself a Dorset resident – has tips for those wanting to enjoy a short break in Sherborne.

Hardy’s birthplace as detailed in Under the Greenwood Tree. Credit: Alamy Stock Photo